Home > Bring on the Bison

Bring on the Bison

Bison Bites at Corndance Cafe
Mention bison and I want to break into song, “Oh, give me a home where the buffalo roam…” Bison are American buffalo, the same creature that once roamed the continent. These mammoths are not endangered. In fact, they’re a sustainable food source in demand on dinner plates. Bison tastes a lot like beef and isn’t at all gamey, says George Pesek, chef and owner of Corndance Tavern in Mishawaka. Recently, I sampled bison bites at Corndance. Wrapped around green onions, the bison was seared with house-made hoisen sauce and pickled ginger. Yum! In fact, the dish reminded me of Mongolian beef. George serves bison at both restaurants and has his own bison ranch; raising up to 14 head each year, supplementing those with bison from Cook’s Bison Ranch in nearby Wolcotville in LaGrange County.

“Ten years ago when we put bison on the menu, it was a novelty. People ordered it because they wanted to try it. Now people order it because it tastes great and it’s so healthy,” says George. Bison is high in iron and protein, yet packs fewer calories and only one-third the fat of skinless chicken breast meat. George often includes bison dishes as daily specials, but the bison burger and bison bites are menu staples. “Prime cuts are only about 10 percent of the carcass, so we do short ribs, sirloin, stir-fries. We utilize the whole carcass, just like the Indians.” 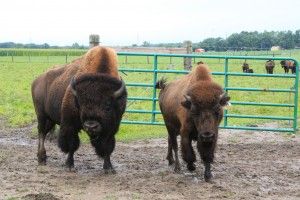 Visit a Bison Farm
So where do the buffalo roam these days? “There are bison ranches in all 50 states, including Alaska and Hawaii,” says Ruth Koeppen, owner of Broken Wagon Bison Farm in Porter County. Broken Wagon has 84 bison on its 80 acres and offers tours of the ranch. “Back in 2003 when we first brought bison onto the ranch, cars were screeching to a halt on the road to do a double take,” she laughs. “We started by building sturdy fences 6 feet high around the paddocks. People wondered if we were getting elephants!”

Ranch-raised bison live very much like they did on the American plains. “You won’t find bison ranches with buildings for the bison. They are not domesticated,” Ruth says. Bison eat grass and are not fed antibiotics or hormones. The Koeppens live on the ranch—so it’s truly a home where the buffalo roam—where Ruth has begun a side business sewing bags and clothing from bison hide. The Native Americans would be proud.