Moser’s Austrian Cafe in New Carlisle, St. Joseph County, is one of 28 destinations on the Northern Indiana Foodie Trail. Learn more about the foodie trail here.

Schnitzel with noodles – it was one of Julie Andrews’ favorite things, along with raindrops on roses and whiskers on kittens, when she twirled through the Austrian countryside with a train of children in tow. It’s also one of Chef Werner Moser’s favorites, at least by the looks of his menu, which abounds with variations of the traditional Austrian dish. 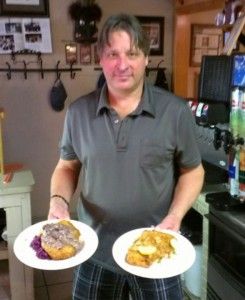 As the owner and operator of Moser’s Austrian Café in New Carlisle, Moser has been serving up a taste of his native Austrian cuisine for adventurous foodies since 2006. So popular has his food become that 90 percent of his customers come from out of town, he says, and it’s not difficult to see why. When I visited the café for the first time recently, I was amazed at the number of options before me – there’s a staggering 12 variations of schnitzel alone. Starting with the Hot Wurst Platte as an appetizer, I tasted my way through a delicious sampling of traditional Austrian sausages: Bratwurst, Debreziner, Thueringer and Weisswurst. For the main course, I opted for Kaiserschnitzel, or schnitzel seasoned with a creamy white wine beef sauce and capers with späetzle (drop noodle) and German potato salad on the side. (You can swap the salad for a heaping portion of cabbage if you’re so inclined.) I’m not embarrassed to admit I finished every bite. 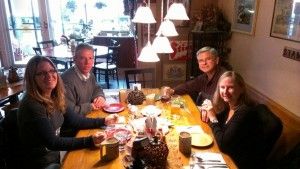 Moser learned his craft by cooking in the kitchen of his parents’ bed and breakfast in Bad Holfgastein, a sleepy town nestled in the Austrian Alps. Arriving in the States in 1982, he exchanged one quaint town for another – New Carlisle has a population of less than 2,000. His wife, Jennifer Moore, who decorated the restaurant and helps Moser run it, is originally from Northern Indiana. 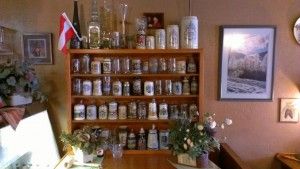 Beer steins from Austria and Germany on display.

A traditional Austrian dining experience is the hallmark of Moser’s restaurant, but the authenticity begins even before a single morsel is tasted. Music streamed from an Austrian radio station fills the intimate space without overpowering it. Tucking into a cozy booth, diners can admire the décor as they peruse the menu: shelves of beer steins from locations like Frankfurt am Main and München mix with an eclectic array of photos of Alpine villages and other classically Germanic scenes. 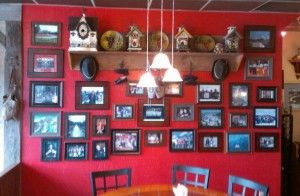 Photos and other items line the walls.

Wash down your food with a stein of imported Austrian beer, or bier, and after dinner, be sure to peruse the dessert case displaying a scrumptious array of goodies like mixed berry strudel and German chocolate cake. After dessert, take a stroll along Michigan Street in New Carlisle’s charming downtown and be sure to peek in the Village Shoppes, three stores brimming with high-end Christmas decorations and home décor items.